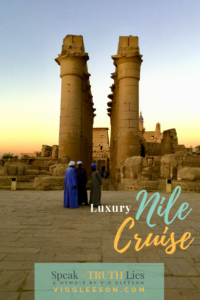 He won’t come with me this afternoon and I invite my new Dutch friend, Wilma, to join me for our final daylight hours at the vast Temples of Karnak and Luxor. Wilma knows her stuff, she’s been here before, and was he still alive she would for sure have a love affair with the legendary Ramesses II.

19 years ago, Wilma longed for a child, she was standing on the same spot she is now, by the Scarab Beetle, by the scared lake. 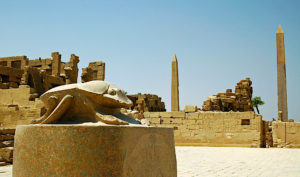 The legend has it that, “The one who circle the statue of the Scarab Beetle, one of the enduring symbols of ancient Egypt, representing rebirth, seven times, will meet their soul mate.” Wilma circled the scarab beetle with a profound wish in her heart, a year later her daughter was born. You never know, the divine powers of Ramesses II, or the Scarab herself, may have had a hand in her conception. 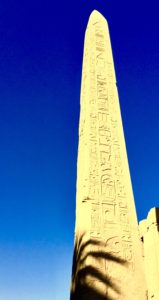 I remember the obelisks form my 6th grade history books. In Norway we referred to them as phallic symbols, and they are indeed the picture of enormous erections penetrating the sky. I chuckle at the story about Thutmose III, who ordered large stone walls to be built around the obelisks’, when he reconstructed the Great Temple, during his reign. Was he trying to hide them so not to be reminded of erections at all? 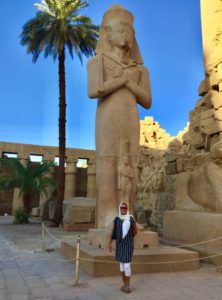 The 5,000 square meter Hypostyle Hall, with it’s 134 massive columns arranged in 16 rows, 12 stretching 21 meters high, while the other 122 stand 10 meters tall, all with a diameter of over three meters. The day feels cool in their shade and we swap cameras and photograph each other. When Wilma tell me to take her place in front of Ramses II with his daughter Meritaten, for a photo, I promise myself to find out more about this enigmatic figurehead, then I smile as the shutter close and eternalise my image in front of King Rameses. 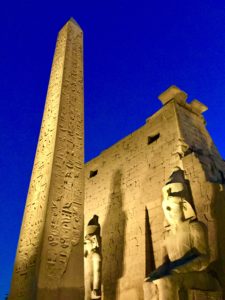 I could easily spend a few days in Luxor, wandering the ancient sites, but right now it’s time to leave Karnak and drive to Luxor Temple. Soon the 3 kilometre Avenue of Sphinxes linking the two temples will open, and in the winter months, the walk will be lovely, in good shoes under an open umbrella. 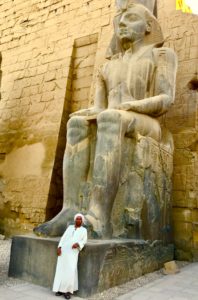 My head feels light, like my thoughts and impressions are floating away. So much I have seen makes no sense to my rational brain. I spend the 10 minute bus ride grounding back to myself, only to have my mind entirely blown when I enter, through the 24 meter high pylons, into The great Court of Rameses II at Luxor Temple.

The door, high up on the left wall, looks entirely out of place but strangely familiar. Just as Ahmed starts telling its story I recognised the Islamic Mosque style. ‘As you can see the door is about 4 meters above us, which means that’s where the ground level was at the time they built the Mosque.’ Ahmed continues, ‘All of what we see here was under layers of sand, up to this door.

The Mosque is still in use today, but the worshippers enter from the door on the other side of the building. 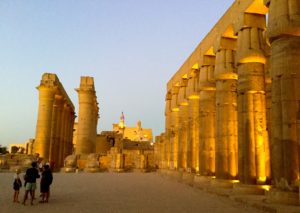 Beneath the Mosque, is the remains of a Coptic church.’ My jaw drops. ‘Are you serious?’ I ask Ahmed, who chuckle at my expression. Yes, this is indeed the site where the ancient myths, gods and rulers, meets the Bible, the Koran, historians and archaeology. I look past the seventy columns surrounding Rameses’ court, straight through to the Colonnade and get a chill, as I notice the setting sun.

We walk on and I mention that the Imam will start singing the evening prayers as soon as the sun has set. Ahmed questions my assumptions based on his understanding that times for prayers are not connected to the sun, but rather some other intricate system. I’ve been trying to figure out the system myself and recognise the gap in his knowledge, without understanding the details myself, at all. 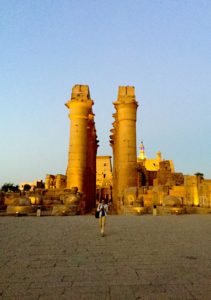 At this point, I can hardly take in any more information, so I drift around Ahmed and Wilma. As they talk I take photos, look up and getting dizzy and awed the further I drift and the more I explore.

The carved and painted columns inside The Hall of Horus are cold to the touch and in the quiet of the temple I lean in and hug it gently. I’m alone and its dark and I follow the light through a low wide door leading out to what I imagining would have been their vegetable and herb garden. As I round the corner I see Wilma ahead of me as the first ‘A’ from the Imam rings out from the Mosque towers. We lock eye across the ancient vegetable beds and stand, in profound stillness, as the Mosques across Luxor sings out the songs of praying Imams. My sight is blurred in tears as we find our way back to The Court of Amenhotep where the sun is playing out its last dance, colouring the enormous columns in hues of orange gold with its final rays. 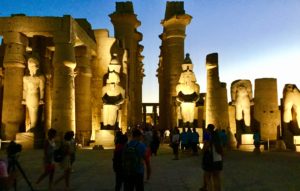 It is in the midst of these ancient monuments of temples, burial sites, phallic symbols, columns and statues of Gods, Noblemen, Kings and Queens, I am reminded of how humbly I must walk, but a very short path, on this earth, where giants like Pharaohs have walked thousands of years before me. 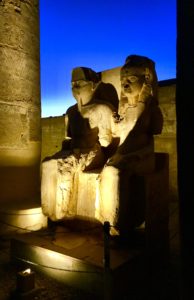 We leave with a final goodbye to King Tut and his wife Ankhesenamun, quietly seated to our left as we exit into the dark night.

The impressions have left me both awed and drained, and back at Amwaj I change into my swimsuit and cool down in the pool before catching up with Shane, for a drink on the sundeck, before dinner, to which we arrive late. The two slices of cake, left fr us on our table, reminds us of Peters birthday, their table beside us now empty. Golden Oldies play through the speakers accompanied by a man on a clarinet, then a violin, as he attempts to entertain. 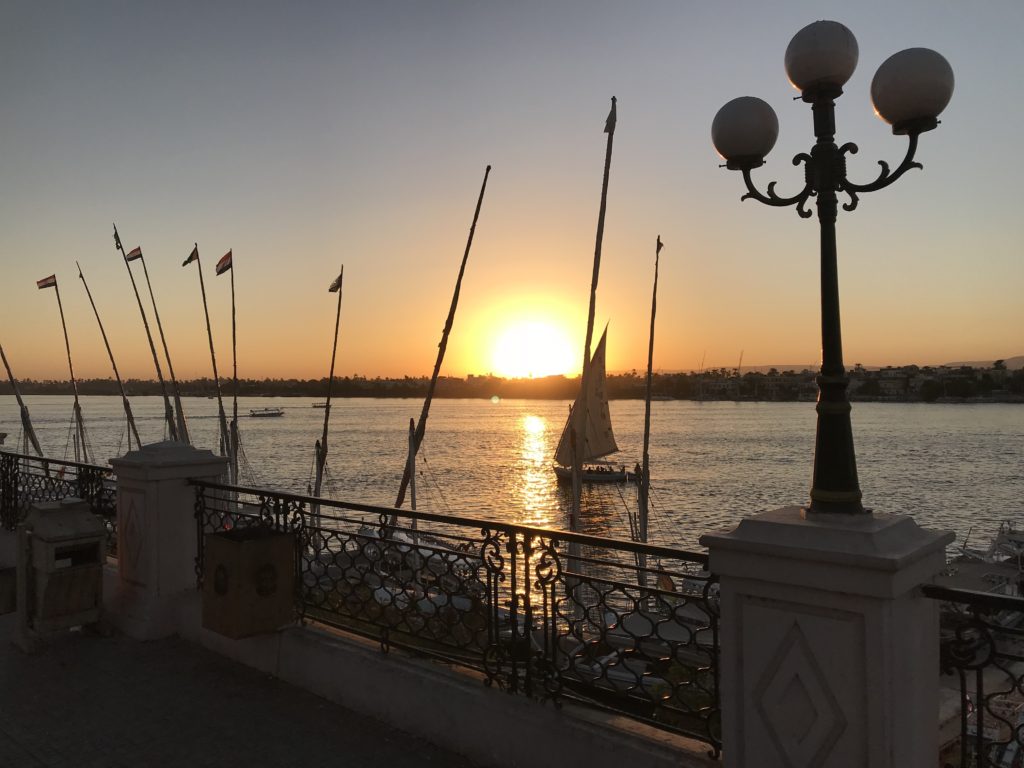 The crew have cancelled the bellydancer tonight so we head straight upstairs where we spend the evening with Silvia and the birthday boy talking about Australia before we turn in our final night.

Gina is doing her Egyptian Luxury Tour in November 2018. Visit Egypt Luxury Tour on Facebook to book and find out more.

Much Love and Light

I’d love to keep in touch, don’t you? Pop your details in below and every few weeks, or so, I’ll send you my musings on writing, life and #TRUTH.

❝ I can read the book and do the exercises but i

The Artist's Way Course will do this and so much m

“Community” seems to have emerged as a 'trendy

Cheerfulness can easily be simulated by small shif

It is not clear to me, though I sense the meaning

These used to be my least favourite lines. I feel

These were and still are my favourite lines from t

Yes, teach me this now. How do I surrender my sen

Be myself? Myself? Who even is that? Not even b

I never quite understood this one. Maybe I would i

Achievements and plans, in this setting, are not a

You know, I think, living with a loud and aggressi

This poem 🧡 helped me through many hard times.

This poem 🧡 helped me through many hard times.

This is happening tomorrow. Come and join us! I